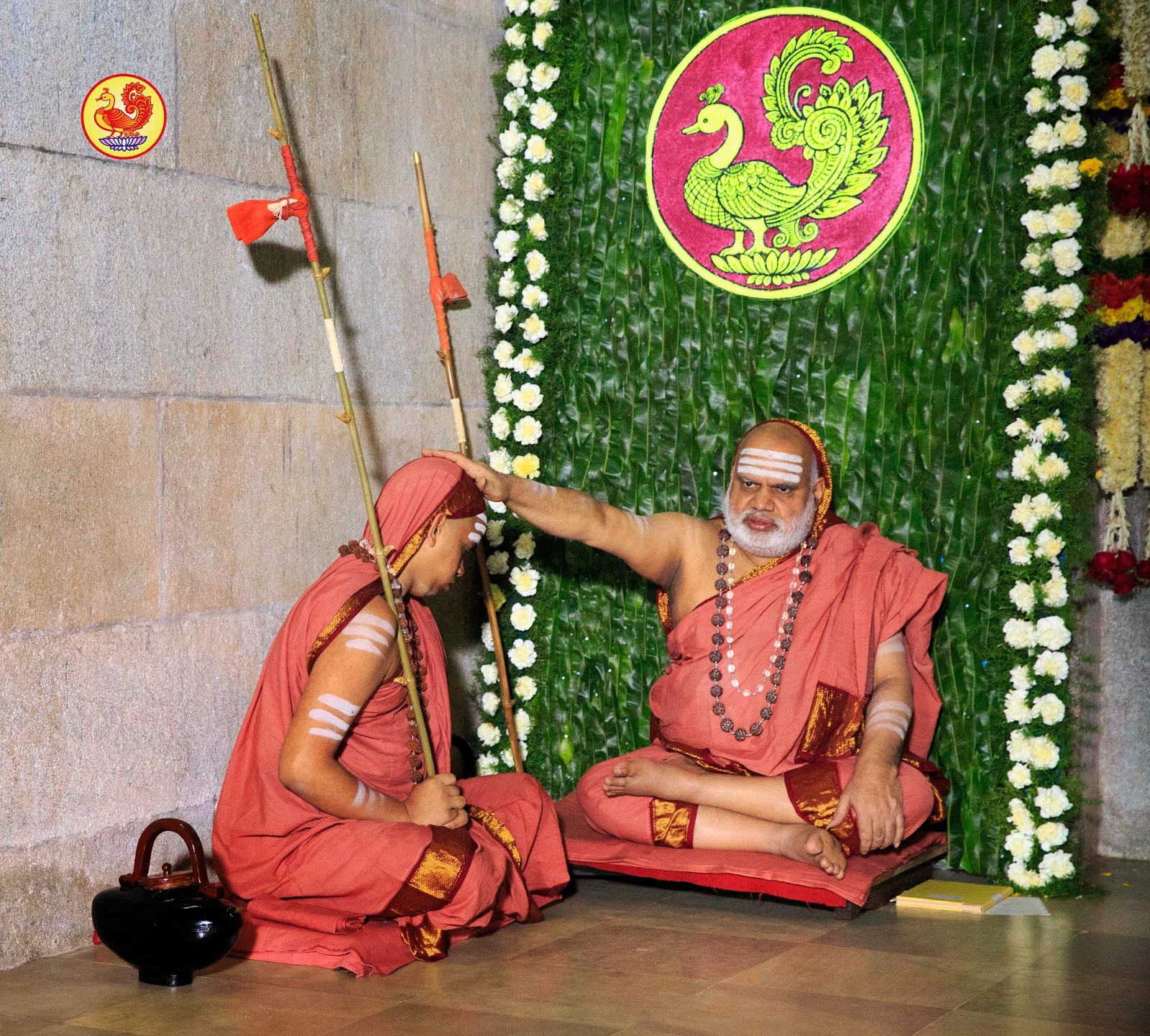 Sringeri Jagadguru Sri. Bharathi Theertha Mahaswamiji announced the decision to annoint Sri. Kuppa Venkateshwara Prasad as his successor designate in a public meeting held on 4th January 2015 at Sringeri. The 36th Jagadguru Sri. Bharathi Theertha made the announcement as ordained by Goddess Sri. Sharada, continuing the unbroken tradition of Sanatana Dharma.  When establishing this Peetham about 1200 years ago in Sringeri, Sri Adi Shankaracharya consecrated the idol of Goddess Sharada (the Goddess of Learning and Knowledge) and invoked Her divine presence and blessings to ever preside over this Peetham. Since then, the Jagadguru Shankaracharyas of Sringeri have always announced their successor only after Goddess Sharada’s divinely ordained-will is revealed to them.  The Sanyasa sweekaara celebrations were held on Magha Shuddha Bidige (22nd Jan) and Magha Shuddha Tadige (23rd January) of  Jayanama Samvatsara (AD 2015) at Sringeri.

Sri. Kuppa Venkateshwara Prasad, a Brahmachari, son of Ved. Br. Sri. Kuppa Shiva Subramhanya Avadhani hailing from Andhra Pradesh is proficient n Vedas and Shastras and is tradition bound.  Sri. Bharathi Theertha recognized his interest and ability to adhere to Shastras and  tradition, and his innate dispassion  towards worldly affairs before considering him for ordaining into Sanyasa.

The programme on Bidige started at morning 8.00am with Gurudarshana, Sri. Kuppa Venkateshwara Prasada Sharma visiting Sri. Bharathi Theertha and taking his blessings.  Then he proceeded to participated in poornahuti of Mahaganapathi Homa at Sharada temple. Sri. Kuppa visited all Sannidhis at Sri Math-temple complex to pay obesience to the previous Peethadhipathis of Sringeri.  He performed inital oblations, Kruchracharane, and Ashtashradhadigalu connected with Sanyasa Sweekaara at Adhishtanam.  Sri. Kuppa was on fast all day and jhagarane (not sleeping in the night of Bidige) and performed Japa throughout the night.

At 8 am, the successor-designate, Brahmachari Kuppa Venkateshwara Prasada Sharma first had Darshan of the Jagadguru Mahaswamiji in Guru Nivas, Narasimha Vanam andoffered Guru Vandanam. After receiving the Jagadguru’s blessings, the Brahmachariaccompanied by Vedic Pundits proceeded to the northern banks of the Tunga and entered the temple of Goddess Sharadamba. Inside the temple, the Brahmachari participated in the Poornahuti of the Mahaganapati Homa held near the Shakti Ganapati shrine. He then had Darshan of Goddess Sharadamba. CEO & Administrator of the Peetham, Dr.V R Gowrishankar and senior devotees then accompanied the Brahmachari for Darshan at the temples of Sri Adi Shankaracharya, Sri Torana Ganapati, Sri Kodanda Rama Swami, Malayala Brahma, Sri Sureshwaracharya, Sri Vageeshwari Vidyaranya, Sri Vriddha Narasimha Bharati Samadhi, Sri Janardana Swami (along with Sri Anjaneya andSri Garuda), Sri Vidyashankara, Sri Balasubrahmanya Swamy and Sri Sakshi Ganapati (inside the Yagashala). He then returned to Narasimha Vanam and had Darshan at the Adhishtanam shrines of the 33rd Acharya, Jagadguru Sri Sacchidananda Shivabhinava Narasimha Bharati Mahaswamiji; the 34th Acharya, Jagadguru Sri Chandrashekhara Bharati Mahaswamiji and the 35th Acharya, Jagadguru Sri Abhinava Vidyatirtha Mahaswamiji.

The programme on Tadige were commenced in the morning 7.30am with Purusha Sukta Homa and Viraja Homa.  After performing the homas, Sri. Kuppa proceeded towards banks of the river Tunga. He performed Preyshochaarana Poorvaka Sarva-bhuta-abhaya-pradhana.  This is a vow of non-violence towards all beings. Then, he renounced white robes, upaveeta, and his tufts in the water as a pre-requisite for Sanyasa.  Sri. Bharathi Thertha provided Sri. Kuppa Kaashaya Vastra, Dhanda and Kamandala accepting to initiate him to Sanyasa.  The Guru and Shishya Swamiji then proceeded to the Samadhi Shrine of Jagadguru Sri Sri Abhinava Vidya Tirtha Mahaswamiji. There, as per the ancient tradition established by Sri Shankaracharya, the Jagadguru then gave the Shisya Swamiji the Pranava Upadesha and Mahavakhya Upadesha. Thereafter, the Jagadguru and the Shisya Swamiji crossed the Tunga river and proceeded towards the Goddess Sharada Temple. Then, the Shisya Swamiji performed the Paryanka Shaucha ceremony on the northern side of the river.

The new pontiff was brought to the north bank of the river in a specially-decorated boat. More than 500 Sumangalis (married women) offered aarathi to both the swamijis at the entrance of Narasimhavana where the Sringeri seer resides. The new pontiff’s mother and other family members participated in the rituals.  Paryanka Soucha was performed with sacred soil and water at another specially-built mantap.   The new Seer then entered the Sharadamba Temple followed by a large number of devotees shouting slogans and Vedic pundits chanting mantras.


The Sanyasa Deeksha  and Shishya Sweekara rituals concluded with both the seers offering prayers to Goddess Sharadamba and the deities at all the temples in Sringeri.   Sri Mahasannidhanam and Sri Sannidhanam then emerged from the Goddess Sharada Temple to bless an over joyous and overflowing crowd of devotees, and had Darshan at all the temples of the Math. Later, they returned to Narasimha Vana on the southern side of the river.   Many Shishyas, including representatives of Governments, erstwhile Rajas, Mutts and other institutions offered Kanike to the both Swamijis.  Representatives from the Kerala and Andhra Pradesh governments, judges of different High Courts and industrialists from South India were among the devotees. Both Guru and Shishya visited all Sannidhis at Sri Matha Complex.

In the evening, Bharati Theertha Swami and Vidhushekhara Bharati delivered spiritual discourses. They were taken on golden and silver palanquins after 9 pm.
Posted by medsyn