Article 15 is a Hindi movie released on 28th June 2019. The movie is directed by Anubhav Sinha, an acclaimed director.  The script is written jointly by Anubhav Sinha and Gaurav Solanki. T he movie was a success with approximately 62 cores rupees revenue by July 2019.  The duration of the film is about 130 minutes and belongs to Crime/thriller genre. Ayushmann Khurana, a well known actor has played lead role in the film. 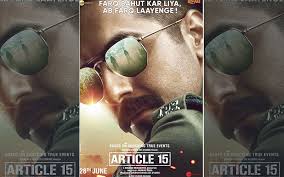 The plot of the movie is appreciated by almost every review published by Indian as well as foreign media channels as socially relevant.  But, interestingly, not much is written about quality of acting and cinema acting with respect to this film.  It may be noted that there was no controversy over the film Article 15 either before or after the release although it is a contemporary movie dealing with a controversial topic based on events (crimes) widely reported by media.  Specifically, the plot is built in the backdrop of a gang rape of three girl children in a village and a conspiracy around the crime.  The base for the plot is Badaun gang rape reported from Uttar Pradesh in 2014.  The script of the movie toes a politically correct line, but unfortunately contributes to socially detrimental results by sensationalisation of crime and projecting it as an evidence of increasing caste conflict in India. Although Anubhav Sharma is an experienced writer, the theme is influenced by Gaurav Solanki, a smaller but ideologically motivated writer.

Anubhav Sinha has completed his mechanical engineering degree from Aligarh Muslim University. His scripts, except for the Mulk, revolve around commercial love stories and thrillers.  Although, his movies include stories having complex and unexpected turns often with depressing endings, fiction based scripts were entertaining without any collateral social damages.  The Mulk, for a change, focused on a contemporary subject, but reinforced politically correct perceptions.   Mulk does not accept that family of a terrorist has responsibility and is accountable before law. The movie supports the arguments that exempt family and surroundings of a terrorist from prima-facie enquiry.  Gaurav Solanki has written songs for a couple of movie and a few short stories.  His book on short stories 'Hisar Mein Hahakar' (Hullaballoo in Hisar) has characters of women sexually exploited by men and literary reviewers have criticized about vulgar contents of these stories.  Social Engineering with commercial success is prominently on the agenda of Gaurav Solanki as he has revealed in an interview to The Hindu in the aftermath of release of Article 15 (on July 10th 2019).

Article 15, scripted combinedly by Anubhav Sinha and Garual Solanki, is also contemporary but supports the fake news stories of Badaun gang rape and continues the sensationalisation of the 2014 rape.  The movie substantiates fake narrative of Badaun gang rape of 2014 in Uttar Pradesh that so called upper caste men raped SC/ST girl children. But, in reality, the in Badaun, OBC caste members were involved in committing the crime against the children belonging to other OBC caste groups.

Success of the film Article 15 is expected to open a flood gate of politically correct, socially damaging themes as the subject of commercial movies. Appreciation, money and absence of controversies are clearly visible to film makers and attractive to social engineering projects.

Posted by medsyn No comments: Links to this post